Eric Vigouroux is a successful off-road racing driver and team manager. The Dakar Rally veteran became an 80 Day Race ambassador as he shares the passion for adventure and does feel the need to promote e-mobility as well.

Vigouroux was intrigued by the adventure of the Dakar Rally when it launched in 1979. He found a way to impress the world by participating with a quad in 1996 and completed the rally twice. Soon the Frenchman – who recently became an American citizen – was invited by manufacturers and completed 15 successful years in the off-road racing.

In this Q&A he explains about the reasons why he wants to turn his career into a sustainable direction.

You are an avid and successful Dakar Rally participant, first with a quad followed by projects with Ford and Chevrolet. What made you decide to participate year after year? I was still a young teenager when Thierry Sabine launched the first Dakar Rally in 1979. Like millions of people at that time, I was absolutely amazed when I discovered the first images on TV showing some crazy competitors riding and driving their impressive machines across some of the most fascinating landscapes of Africa. The perfect mix between race and real adventure where people would help each other to overcome all the obstacles and dangers was a true revelation to me. Year after year the Dakar Rally became a society phenomenon and very quickly I told myself: “I’ve got to do this, I want to be part of it”! Because I was by far not wealthy enough to participate in the famous “Paris-Dakar”, I had to find an idea to get attention from the media which would then translate into sponsorship. This is how I came up with an original challenge: to finish the Dakar Rally with a quad because nobody had done it yet in 1996. After two unsuccessful attempts in 1997 and 1998, I finally reached my goal twice in the following two years. Thanks to this achievement I was asked to join the legendary French rally driver Bruno Saby, winner of the 1993 Dakar Rally, in his official Ford Racing Team. We both completed the rally successfully and it kick-started my 15-year career in the car category. After Ford withdrew from its rally-raid programme, I received the opportunity to sign a sponsorship contract with Chevrolet USA and a few years later with Chevrolet Europe. After many years of racing across the most beautiful deserts on earth in almost all continents, I was able to achieve some good results winning several important races and to become the 2010 FIA World Cup Champion (2wd category). 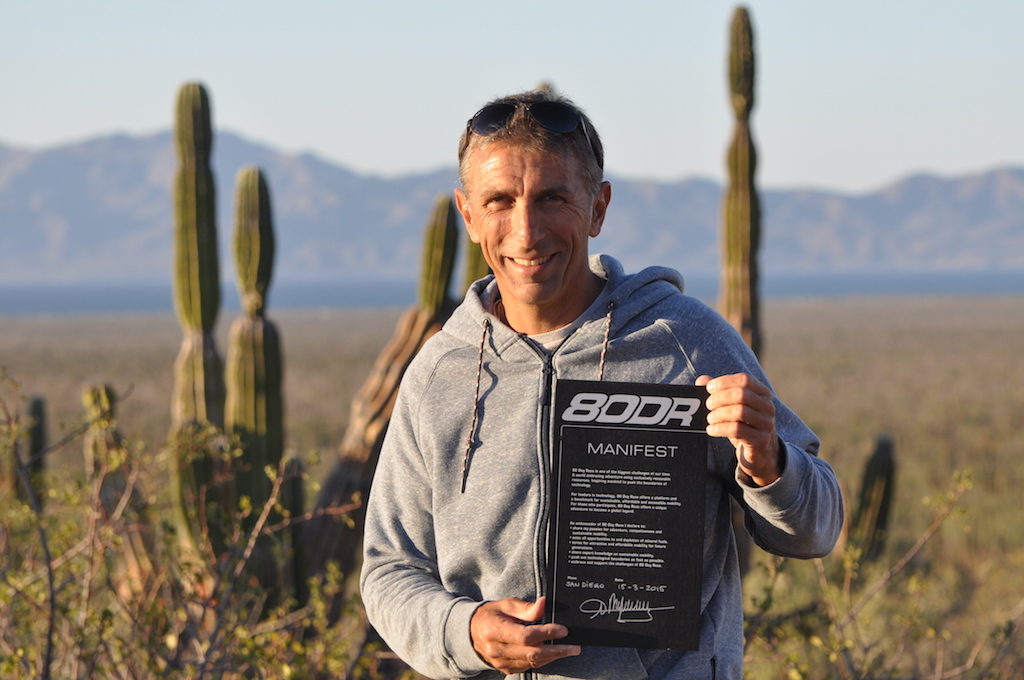 In addition to your French nationality you recently became an American citizen. The United States is the place where you are working on an electric sports vehicle. What can you tell about that project? I decided to move from France to San Diego California with my family in 2008. From a professional point of view my goal was to get closer with all my suppliers in the Off-Road Racing industry since San Diego is recognised as “the hub”. I spent the past 7 years working with some of the best designers and constructors and I learned a lot. Today I want to use my knowledge and network to build electric race cars because I really believe this is the future, even for off-road applications. I have already started a pretty exciting project but it’s too early to talk about it…

In 80 Day Race participants race around the world without the use of fossil fuel and combustion engines. What attracted your attention? Two important things: the first one is to have an opportunity to take part in a real adventure again. I think 80 Day Race has the potential to become the next big sports challenge in the world (which the Dakar Rally used to be many years ago) and I really enjoy that! The second reason is more personal. I’ll turn 50 this year, my wife and I have four kids and I want to prove to myself that it is never too late to start doing things a better way. I don’t agree when I hear some people saying that protecting the environment is a task that belongs to the next generation. As a result, I want to give my career a new direction for the years to come by promoting renewable energies and I feel like 80 Day Race is the perfect platform for that.

Racing 40,000 kilometres around the world seems a great new challenge for you. Are you aiming to participate? Yes, definitively. I’d like to make the most out of my experience as an entrepreneur, team manager and racer to tackle this very exciting challenge. However, the first huge challenge will be to get the proper funding but thanks to this innovative concept proposed by the 80 Day Race founders, I think we have some serious arguments to convince sponsors who are concerned about the environment and new technologies.

You are an 80 Day Race ambassador. Why should people embrace this competition? As far as I know, 80 Day Race is the only global competition promoting important values such as adventure and clean mobility. I believe that attending the first edition will be a once in a lifetime opportunity to make history!